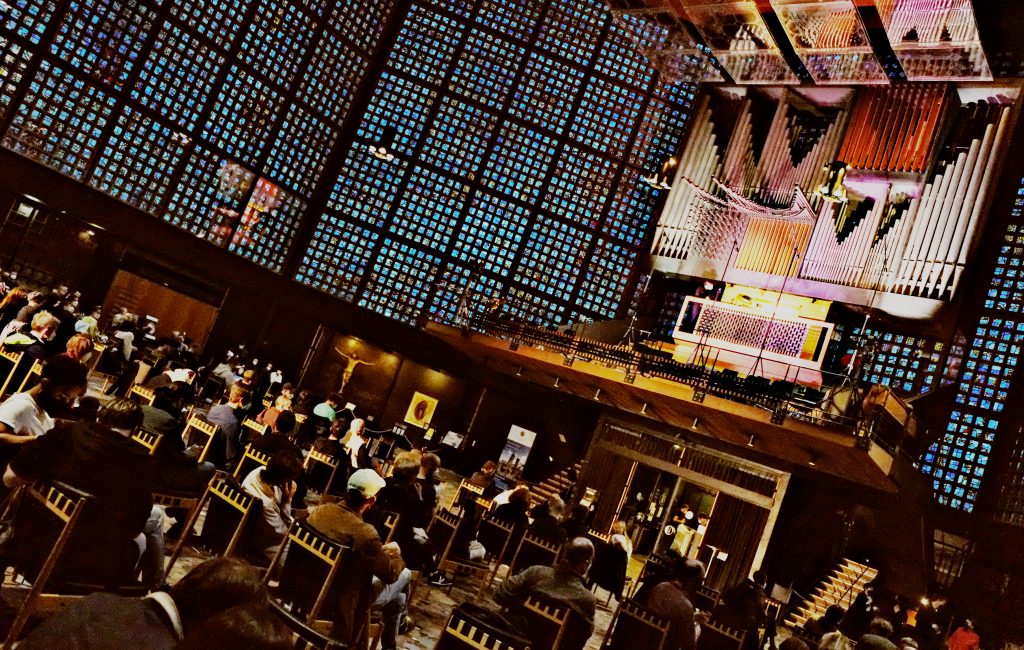 Digitalisation advances ever further into areas beyond the virtual – for the pipe organ, this opens up new artistic possibilities. All of the instrument’s parameters can now be controlled by computer via interfaces, while the sound is still created in the pipes of the organ. In this way, a meshing of instrumental and electronic music, the possibilities of which are largely untapped, can be achieved. The international concert series AGGREGATE exposes this potential for artistic innovation in organ music of the 21st century over seven evenings of concerts in Germany, Belgium, the Netherlands, Norway and Iceland. Composers with differing musical backgrounds and orientations have created new pieces for automated pipe organs, which will be realised on seven special but very different organs. Contemporary electronics, Neue Musik, avant-garde pop and noise music interweave with one another. Pioneering artistic strategies are explored, from purely automated organ concerts via combinations with instrumentalists to real-time control and synchronisation with electronics. AGGREGATE pursues the fundamental questions that computer controlled instrumental music poses: virtuosity and its overcoming, the limits of perception of highly compressed musical events, the crossovers and links between electronic and acoustic music, objective interpretation and the effects of mechanically precise reproduction.

The internationally renowned organs in Orgelpark Amsterdam, the Stavanger Concert Hall, Hallgrimskirkja in Reykjavik or in the Kunst-Station Sankt Peter in Cologne all offer unique technical and sonic possibilities. The number of pipes, timbres of the register, additional striking mechanisms, wind pressure control and the acoustics of the spaces are all very different. The organ inaugurated at St. Antonius in Düsseldorf Oberkassel in 2017 was one of the first in the world to make use of SINUA control technology, in which the registration of the instrument is radically reorganised. The full potential of the organ as a synthesiser unfolds through the instrumentation of the timbres and the selection of pipe sounds. Unrestricted automation of the register makes the creation of completely new tonal palettes possible.

The invited composers explore artistic stylistic devices that only become possible through programmability: automated changes in register, concurrency of different tempos, extreme density of events, complex polyrhythms, aural-physical phenomena, or sliding transitions between tonal, noise and rhythmic. Through automation, the characteristics of the pipe organ as machine and acoustic synthesiser come to the fore, uncovering innovative artistic positions between acoustic and electronic music. Automation, which was already being applied at the beginning of the 20th century, reaches a completely new quality through computer control. Control is now significantly more reliable, register changes and note durations can be adjusted in millisecond intervals, meaning that new acoustic phenomena can be created.

MIDI technology developed in the 1980s is means by which organs can be controlled by computer. Current technology enables MIDI notes to be created in real time and immediately checked on the instrument. Algorithmic composition programmes enable intuitive composition processes with a large amount of material. Thousands of notes and parameters can be generated and manipulated in the shortest of time. The computer-controlled organ is the provisional and logical climax in the development of the instrument, which has been continually updated using the newest mechanical achievements since its invention.

Seth Horvitz aka Rrose / London (b.1973, Venice Beach USA) holds a BA in Cognitive Science from the University of California at Berkeley (1995) and an MFA in Electronic Music and Recording Media from Mills College (2010). He works as a composer and performer of experimental electronic and techno music since 1997 and released on international record labels such as Mille Plateaux, Plug Research and many more. Seth Horvitz‘s „Eight Studies for Automatic Piano“ are inspired by the work of James Tenney, György Ligeti, Charlemagne Palestine, and Conlon Nancarrow and makes use of computer-aided compositional processes to test the limits of human perception and machine precision. It relies on a bare minimum of technical means to explore notions of temporal distortion, iterative process, and elegant complexity. Presented in an immersive concert setting „Eight Studies“ questions traditional notions of live performance and musical ‚life.‘
www.rrose.ro

Nils Henrik Asheim / Stavanger (b.1960 Oslo, Norway) is a composer and organist. Asheim is educated at Norges Musikkhøgskole and the Sweelinck Conservatory in Amsterdam. His production comprises chamber music, orchestral works, musical theater and digital music. Since 1991 he has been active on the local music scene, having served as the director of the local branch of Ny Musikk (the Norwegian section of ISCM). In September 2012, Asheim was appointed organist at the Stavanger Concert Hall. His new work „House of sound“ a commission from the Norwegian Broadcasting Orchestra premiered on May 8, 2019 in Oslo.
www.nilshenrikasheim.no/organ

Robert Lippok / Berlin is an electronic music composer based Berlin, after two decades performing with legendary trio To Rococo Rot. His work centres around creating installations, theatre and stage design for interdisciplinary performances, as well as a steady output of ambient techno experimentations.Born in 1966, Lippok studied stage design at Kunsthochschule Weißensee Berlin, before forming To Rococo Rot with his brother Ronald Lippok and Stefan Schneider in 1995. Lippok’s first solo EP Open Close Open was released on renowned label raster-noton followed by Redsuperstructure in 2011 and Applied Autonomy in 2018. Lippok also tutors at NYU’s Clive Davis Institute of Recorded Music and is part of the curatorial board of 4D Sound in Budapest, Hungary.
https://rlippok.bandcamp.com/

George Rahi / Vancouver (b.1987) is a composer, performer, and installation artist. He uses self-created & altered instruments as a method of exploring new relationships between sound, space, technology, and listening. Drawn to the tactile, mechanical, and sculptural realms of sound, his artistic works are frequently expressed as large-scale installations, electro-acoustic compositions, and works for theatre, and public spaces, notably for the Canadian Music Centre, Global Composition (Darmstadt), Vancouver New Music, and Insitu Recordings (Indonesia). He holds an MFA degree from Simon Fraser University and is the recipient of the 2018 R. Murray Schafer Soundscape award.
www.georahi.com

Jessica Ekomane / Berlin is an electronic musician and sound artist. Her practice unfolds around live performances and installations. Her quadraphonic performances, characterized by their physical affect, seek a cathartic effect through the interplay of psychoacoustics, the perception of rhythmic structures and the interchange of noise and melody. She hosts a monthly show on Cashmere Radio was part of the SHAPE Platform 2019 and her work has been presented in various institutions across Asia, Australia and Europe such as CTM festival, KW (Berlin), Ars Electronica (Linz), Dommune (Tokyo) and MUMA (Melbourne) or Venice Biennale. She released her first LP “Multivocal” via Important Records
www.jessicaekomane.com

Arturas Bumšteinas / Vilnius (b.1982, Vilnius) is an artist working within the fields of performative sound art, radio art, installations, experimental acoustic and electronic music. Since the year 2000 he has collaborated with many international artists; In the year 2013 he was awarded “Palma Ars Acustica” prize for radiophonic arts. Bumšteinas was artist-in-residence at the DAAD Berliner Künstlerprogramm in the year 2017.
www.refusenik.org

Hans Fidom leads the Orgelpark Research Program and is professor of Organ Studies at VU University Amsterdam. As a member of the managing team involved in the realisation of the Utopa Baroque Organ at the Orgelpark, he managed the building process of the instrument. It is a so-called hyperorgan: an organ that allows combining its sound resources in ways unthinkable before the start of the 21st century. Its sound concept, on the other hand, is historically informed: most probably, it would have reminded Johann Sebastian Bach of the organs he used to play in his day. Interlinking the artistic and the academic, Fidom’s research focuses on the activities of sounds and listening to them as pivotal aspects of music(king). https://www.orgelpark.nl/en/Home

Elisabeth Hubmann studied musicology, classical studies, piano and organ in Innsbruck, Genève and Amsterdam. She works as an organist at Obrechtkerk Amsterdam, where she has performed several premieres of contemporary organ and choral music. She has recently been appointed organist of St. Paul, Genève. She is particularly interested in anthropological perspectives in music, historical and modern instruments, chamber music, performance practice, improvisation and interdisciplinary projects. In 2018 she co-edited a book on “Art as a Sociocritical Medium” and researches currently on hyperorgans and sound heritage, alongside her engagement with ethnomusicology. https://sites.google.com/view/elisabethhubmann

Benedikt Aufterbeck is a trained organ builder and musician while Thomas Stöckl has a degree in music and many years of experience in electronics. Since 2007, the two founders of Sinua have been developing innovative hardware and software for church and concert organs. The two engineers are united not only by their love of music, but also by their love of experimentation and the drive to unlock the full sound potential of the organ with innovative methods and well thought-out control technology. http://www.sinua.de/konzept.html

Paul Paulun regularly presents „Fundstücke“ at Deutschlandfunk Kultur, is a sound researcher, audio collector, author on sound-based topics and much more. He is active as a music consultant and dramaturge for film and theater productions and runs followmusic.net